Mammals September 6, 2021
This story discusses the tendency among conservation scientists to characterize endangered species as “homeless.” It uses my personal experiences living in Eugene, Oregon, and the contentious removal of a Hawaiian monk seal from the island of Moloka'i to suggest that displacement is experienced by people and species together. As these examples demonstrate, addressing houselessness and homelessness requires multispecies justice.
2200 words

I live on the traditional homelands of the Kalapuya People in the mid-sized city of Eugene, Oregon. While Eugene is known for the University of Oregon and its history of environmental activism, the city is equally known for its housing crisis. The lack of available housing due to unequal population growth, wealth inequity, inadequate zoning policies, and fixed urban growth boundaries, coupled with generational poverty and inadequate funding for social infrastructure led Eugene to recently have the highest unhoused population per capita in the United States.[i] Although the total number of people experiencing houselessness has declined since 2019, the issue remains central for all who live and work within the city and, most obviously, for those unable to access permanent shelter.

As someone who is fortunate to be housed and who lives a block and a half from a 75-tent encampment that has been in use for nearly a year now, I’ve been immersed in conversations with housed and unhoused neighbors, city officials, local business owners, and employees of nonprofit organizations about this issue. Through these conversations I’ve come to understand that houselessness — and, at a much larger scale, the global phenomenon of displacement — need to be reframed and addressed through the lens of multispecies justice. Such an approach argues that inequities experienced by marginalized and vulnerable groups of people also impact groups of species, and that shared inequities can only be eliminated by pursuing justice for people and species alike.

In Eugene and elsewhere, houselessness is either seen as a social issue, if one approaches it from the perspectives of social justice activists, or an environmental issue, if one encounters it from the viewpoints of conservationists. The former sees the accumulation of trash along the banks of the Willamette River, for instance, as a symptom of structural failures that prevent people from accessing basic resources and disposal systems, whereas the latter sees it as a dangerous and unsightly environmental pollutant that threatens the lives of other species. These competing perspectives speak past each other, eliding the ways in which social and ecological concerns, and the people and species who populate the landscapes of Eugene, are entangled. I’d like to suggest instead that houselessness can only be addressed with the needs of displaced people and vulnerable species in mind, and that doing so could challenge not only the dehumanization of people but also the elision of species in ways that foster mutual wellbeing.

Houselessness is not limited to the species who encounter encampments, temporary shelter sites, and housing developments, nor is it restricted to the dogs, cats, birds, and other creatures who live with people in temporary accommodations. An allegory of contemporary emergency, the term “homeless” traffics as a potent marker of species displacement, depopulation, and death. The term is especially common in discussions and debates about endangered species. Indeed, many species living on the dull edge of extinction have been declared “homeless” by conservation scientists who seek a rationale that will allow them to remove endangered creatures from their native lands and waters so they can be placed under the protection, expertise, and management of scientific authorities.[ii] Native and Indigenous peoples, however, contest such moves, seeing the removal of species who have become endangered through the activities of settler industry as yet another instantiation of colonialism meant to further sever their relationships with species, environment, and place.

Such a contestation played out on the islands and in the coastal waters of O‘ahu and Moloka‘i in 2008 and 2009 when scientists with the National Marine Fisheries Service (NMFS), a regulatory division within the National Oceanic and Atmospheric Association (NOAA), together with scientists from UC Santa Cruz, deemed an endangered Hawaiian monk seal “homeless” and, despite the refusal of Kānaka Maoli who asserted he had a home with them, sent him to become a research subject in California and eventually an entertainment spectacle in Honolulu. With 632 mature individuals remaining in the coastal waters of the Hawaiian archipelago at the last census in 2014, Hawaiian monk seals have become the most endangered marine mammal living in U.S. waters.[iii] They are threatened by multiple injustices, including the loss of food due to overfishing, displacement by tourists, entanglement in discarded fishing gear, intra-species male aggression, and military activity, nearly all of which have been caused by U.S. imperialist rule. Conditions have continued to deteriorate over the past decade, making their future presence uncertain at best.

In 2008, scientists with the NMFS found a seal pup wandering along a rocky beach on the island of Kauai. Naming the seal “KP2,” or Kauai Pup 2 (the second Hawaiian monk seal to be born on Kauai that year), they made the unprecedented decision to transfer him to the Kewalo Research Laboratory near Honolulu. During his time at Kewalo, KP2 became conditioned to the presence of human scientists and developed severe cataracts, which were likely caused by the reflection of artificial lights on the surface of the water in his holding tank.[iv] Attempting to slow the development of KP2’s cataracts, marine scientists moved the seal to a shoreline pen at the U.S. Marine Corps Base on O‘ahu. Nearly half a year later they moved the seal again to the Kalaupapa Peninsula on Moloka‘i. Within weeks, KP2 sought human attention and took up residency at a wharf near the town of Kaunakakai. The seal’s eagerness to ride a pink boogie board launched him to international fame.[v] 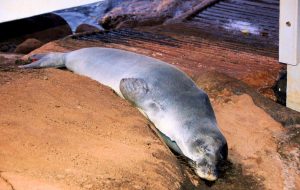 NOAA disapproved of the seal’s friendliness around the people and dogs who frequented the wharf, however. Citing concerns for the safety of people and the monk seal, government scientists relocated KP2 to a remote coastal location on Moloka‘i just six months after his introduction to the island. When KP2 returned to the Kaunakakai wharf a few days later, NOAA decided they had the authority to remove him from Moloka‘i entirely. Escorted by the U.S. military and local police, NOAA captured KP2 and transported him to a holding tank on O‘ahu. A month later in November 2009, NOAA sent him to become a research subject in the laboratory of Terrie Williams, a wildlife biologist at UC Santa Cruz, where he lived in a small tank and participated in various experiments. Three years later, with 80% of his vision obscured by advanced cataracts, KP2 was sent to the Waikīkī Aquarium in Honolulu. Now thirteen years old, the Hawaiian monk seal resides at the Waikīkī Aquarium where he serves as an “ambassador” for his species.[vi]

Scientists from NOAA and UC Santa Cruz repeatedly called the monk seal “homeless” as they sought to remove him from Moloka‘i and transform him into a research subject. In her memoir The Odyssey of KP2: An Orphan Seal and a Marine Biologist’s Fight to Save a Species, Williams describes KP2 as “homeless” and calls him an “orphan.”[vii] Stuck somewhere between nature and culture, KP2 was “neither wild nor tame. His months in rehabilitation with humans and subsequent release among seals had shaped him into a creature that had no home.”[viii] Reading KP2’s desire to cohabit monk seal worlds and human worlds — mostly those of Kānaka Maoli — as out of place, Williams believed that KP2 was perpetually unable to create a “home” in the coastal waters of Moloka‘i. It seems likely that the seal’s advanced cataracts and his status as an “orphaned” member of an endangered species who had been relocated several times also contributed to his classification as “homeless.” Much like dominant views of houselessness which blame personal failure as the primary reason for housing instability, Williams pins the monk seal’s so-called “homeless” status on individual shortcomings. Playing the role of the beneficent scientist who saves another creature’s life by enlisting them in the operations of science, Williams moves KP2 to UC Santa Cruz where, according to her, the seal “found a home.”[ix]

Kānaka Maoli resisted the monk seal’s removal and challenged his “homeless” status, arguing that he had always belonged in the waters and on the beaches of Moloka‘i. Activist Walter Ritte, together with Kānaka Maoli from Moloka‘i and islanders from across Hawai‘i, organized two public protests in late 2009, one following KP2’s removal from Moloka‘i and another preceding his move to Santa Cruz. In the first, protestors gathered at the Waikīkī Aquarium on O‘ahu where they demanded that the seal be brought “back home to Moloka‘i.”[x] In the second, Ritte and dozens of Kanaka Maoli activists returned to the Waikīkī Aquarium where they marched with signs that read “NOAA STOLE OUR SEAL,” “WE LOVE KP2,” and “BRING OUR SEAL HOME.”[xi] In a powerful act of resistance with the monk seal, the protestors performed a blessing to give him the name “Ho‘ailona,” which means “a special seal with a special purpose.” Kānaka Maoli consistently challenged the “homeless” label, arguing that the seal had a home with Moloka‘i islanders.

Today, Kānaka Maoli and other Pacific Islanders experience the highest rate of houselessness in the United States (109 out of every 10,000 people), and Hawai‘i — like other tropical islands exploited by imperial rule and damaged by the conditions imperialism created, including climate change — is experiencing some of the highest extinction rates in the world.[xii] Conservationists, in fact, have given Hawai‘i the dubious distinction of being the world’s “extinction capital.”[xiii] Housed in a large tank at the Waikīkī Aquarium, Ho‘ailona continues to educate visitors and tourists about the plight of his species. 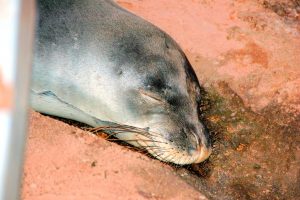 “Home” can broadly be defined as the places and relations that sustain one’s sense of self, identity, and personage. It’s a sense of belonging that emplaces individuals among worlds of actors. In some ways, the concept provides a useful optic for considering how people and other species live among, and co-create, multispecies worlds. To think of what might constitute a home for another requires imagining the texture of their life, in addition to understanding the everyday activities and entities necessary to sustain that life. Indeed, the Greek oikos at the root of “ecology” has supported a field of study that examines the conditions required for such co-existence.

While applying the concept of “homelessness” to other species might expose how environments have been altered to a point where they are no longer habitable, it seems more likely to tear species from meaningful entanglements with others, especially from Native and Indigenous communities. In Ho‘ailona’s case, scientists used the label “homeless” to remove the seal from the Kaunakakai community and enlist him in the biological sciences and the animal entertainment industry where his life took on added value as he became an object of knowledge production and capital accumulation. The work of multispecies justice, it seems to me, is to bring Ho‘ailona back to Moloka‘i where he can be supported by Kānaka Maoli islanders — much like the Lummi tribe’s relentless attempts to repatriate the orca known as Tokitae or Sk’aliCh’elh-tenaut — and to produce more equitable futures for the people and species impacted by displacement in all its forms.[xiv]

[vii] Terrie Williams, The Odyssey of KP2: An Orphan Seal and a Marine Biologist’s Fight to Save a Species (New York: Penguin Books, 2012), 55.