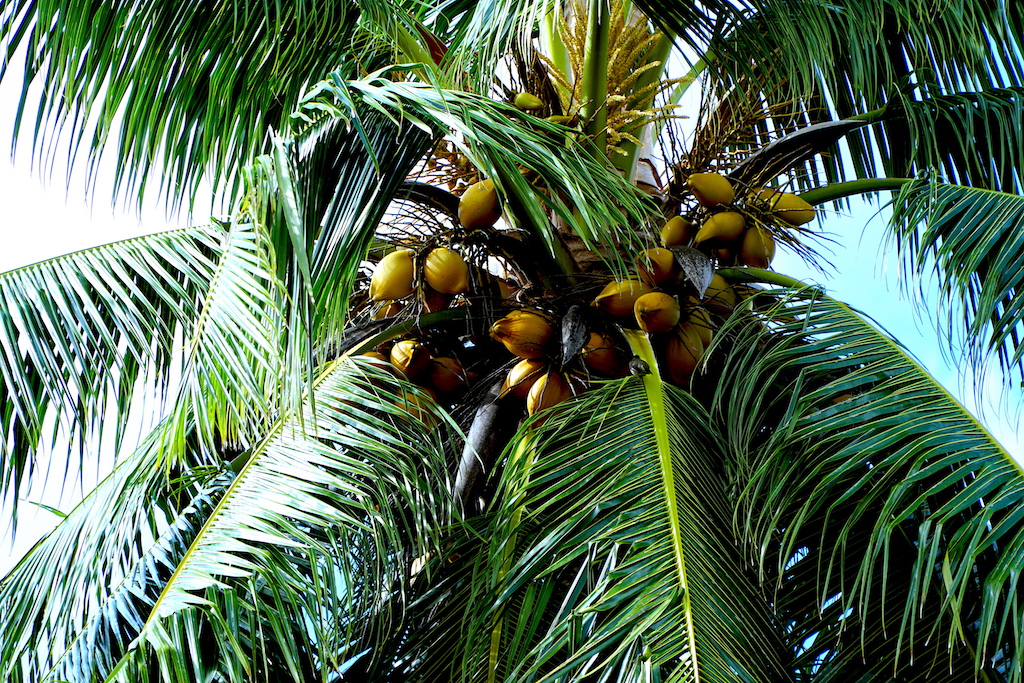 Plants September 3, 2020
An Island fable about the coconut tree, for today and tomorrow.
1700 words

NIU: The Tree of Life – An Island Fable for Today and Tomorrow

You can either read the story below, or click the play button to hear Vilsoni read it.

Hanuj’akia rogrog on NIU.
I’m going to tell you a story about the coconut palm tree!

Once upon a time, there lived a fair girl called Sina.

She was also obedient to her parents and listened to advice from her older brothers.

Stories of Sina’s brave but caring spirit spread far and wide and many men from around Oceania wanted to marry her.

Before sunrise every morning, Sina went to swim with sharks.

The sharks treated her as family, and whenever she appeared, allowed her to rub noses with them.

One morning, to Sina’s disappointment, the sharks were not there.

She was about to leave when a long slippery EEL approached her. “Is your name Sina?” asked the eel. “And is your name ugly?” Sina teased.

“You’re so beautiful”, said the eel, pretending his feelings weren’t hurt at all. “You see, I’m really a prince stuck in an eel’s body. And only the love of a beautiful girl called Sina can change me back to a man.”

“Really?”, said Sina. “But how do I know you are telling me the truth? I don’t even know you!”

The eel swam a little closer to Sina then slid under her armpit, causing her to giggle. She pushed out her long hair and the eel played with it. Then the eel brushed against her face. Sina blushed.

Then Sina tickled the eel’s chin. The eel started to grow bigger and bigger. Confused about her feelings for the eel, Sina pushed the eel away, jumped out of the sea and ran home.

Her brothers were shocked to see their sister looking frightened. “What happened?” they asked.

Sina told her brothers about the eel and how the eel had made her giggle. Her brothers asked Sina if they could meet the eel.

The following morning, Sina followed her brothers’ instructions. She swam with the sharks, then when the eel appeared, she teased then lured the eel to shore.

As the eel climbed up the sand to follow Sina, her brothers jumped out from behind a bush and chopped off the eel’s head.

Sina cried like a baby when she saw the sad eyes of the eel blinking at her.

Then she heard the eel say: “If you bury me, I will become a tree that reminds you of a man. Use every part of me. My nuts will have two eyes and a mouth. Inside my mouth, you will find a sweet, refreshing nectar. And when you drink from me, you will be kissing me.”

Tears rolling down her cheeks, Sina cradled the head of the eel close to her heart and rushed back to her home.

She dug a hole nearby, put the head of the eel inside, and covered it with the dirt of the land.

A long slender trunk emerged with leaves at the top. It looked to her like a man standing on his head. Among the leaves, dozens of nuts clung to each other.

Niu was the name the Islanders gave this coconut palm tree.

The people used the trunk of the tree for house posts, drums, and wooden vessels.

They used the leaves for brooms, baskets, fans, and hats.

They used the nuts, also called niu, for drinking, cooking, making sauces and snacking on all day long.

And they used the husks of niu for making sennit to tie hulls of canoes to voyage across the largest ocean in the world and discover new lands.

And on moonlit nights, parents sat their children down, and told them the story of the origin of niu so that they would never forget.

My name is niu. But once upon a time, I was a prince. Now I’m stuck in the body of a tree, waiting for Sina to love me.

The Islanders called me “the tree of life.” I liked that title, because I gave all that I was and all that I had to help my people survive. And even thrive. They knew who I was, and I knew who they were.

Then tourists arrived on our island, and my relationship with my people started to change. Soon after, I was no longer treated as family.

You see, when the tourists saw me standing there, tall and proud like a strong man, they didn’t like my niu.

They were afraid of my nuts. They said my nuts could fall and kill them. And they wanted my nuts removed as soon as they started to form and long before they can be useful. Imagine that!

They said that if the Islanders wanted their money, then I must stop being niu! And become an eunuch!

So, as soon as my nuts would start to form, the Islanders would chop them off from my body. Imagine that!

I put up a brave face, and did the best I could, gracing the edges of sandy beaches, along the roadside, and around hotels and high rises.

At Christmas time, they attached shiny lights all over my body, then turned me on with an electric switch. Imagine that!

Sometimes I thought I saw Sina dancing under my lights. I longed for her to notice me, but how could she, when she was too busy dancing and smiling at the tourists? She had no eyes for me!

The tourist numbers grew bigger and bigger. And my people made more and more money. And they forgot about me, their older sibling.

Then one day, a deadly virus unleashed a PANDEMIC that spread like wild fire all over the world.

My people stopped the tourists from entering, closed down the hotels, and wore masks upon their faces.

Scared of other humans who could be carrying the virus too, they stopped seeing each other and hid in their homes.

And they forgot about me, standing there in the hot sun, all day long.

I had never felt so alone and so unloved.

Before long, my people had nothing to eat. Many became homeless and ended up on the streets. I felt sorry for my people, and wished that I could give again.

Because the tourists had stopped coming, no one was afraid of me anymore. And my coconuts started to grow again!

When the lockdown was over and my people emerged, they saw clusters of my coconuts clinging to each other beneath my leaves.

That was when they REMEMBERED that once upon a time, I had sustained the lives of our ancestors for thousands of years. I was so happy they remembered who I was and what I used to give to them.

They started collecting seedlings and planting new groves of me on land available to them. This time, they kept my niu on my body until they matured.

They used me for drinking, cooking, eating, and more. They used my leaves to weave baskets, hats, and fans; and they used my trunks to make canoes, drums, and new art works. And they snacked on my flesh all day long.

It felt good to be useful again. That’s what and who I am meant to be!

And I started to have hope that one day, I will become a prince again. 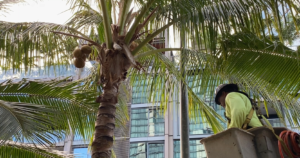 Years later, on a hot summer day, a courageous city girl called Sina picked up an abandoned leaf by the roadside, took it to her apartment, and wove for herself a niu basket.

Carrying her woven basket, Sina went shopping at her local Farmers’ Market where she saw husked niu being sold for the first time!

While examining the eyes and mouth of the dozen brown or white niu on display, she decided to buy a brown niu.

But then she thought she saw a white niu WINKING at her. She picked up this second niu, looked it over, and decided she would buy two.

When she got home, Sina cut open the brown niu and saved the water. She scooped up the flesh, ate some with relish, then proceeded to make a smoothie, using some of the flesh and some of the water from her first niu.

While the blender was running, she carefully examined the eyes and the mouth of the white niu.

Then using a kitchen knife, she carefully opened the mouth of niu.

Cupping her hands tenderly around the lips of niu, she drank from niu to satisfy her thirst.

After she had drunk every drop of niu’s refreshing nectar, a BEAM OF LIGHT flew out of niu and brushed against her face. She blushed.

At this moment, Sina’s face became radiant with light.

Before Sina’s eyes, the beam of light started flying around and shape-shifting into different essences, one of which is that of a handsome black prince.

In my honor, Sina organized a night on the beach under the moonlight.

Looking radiant in a costume made of niu, she declared in front of everyone that she had fallen in love with a black prince! Imagine that!

I thought I would lose my coconuts all over again!

And as the people waited for her prince to appear, she turned to the ocean and danced for me! Me?

She called out my name: “NIU!”

When I appeared, a full moon emerged from behind the clouds and lit up the shore to reveal a whole community dressed up in niu costume.

Then Sina teased and lured me onto the sand to dance with her in the moonlight.

I flitted around Sina’s body and long hair, causing her to giggle. Imagine that!

Then Sina’s two brothers jumped up from the crowd and danced, to show their respect to me, their older sibling.

And then my niu brothers and sisters along the shoreline started dancing in their own unique ways as I flitted from one dancer to another encouraging them, parodying their movements, and infusing the dance with my spirit of joy and freedom.

This celebration of life and death and life again continued until the sun announced the dawn of a new day.

Yes, a NIU day, when I’m embraced and welcomed back as a useful and valued member of my family again.

My ta’ ma muria’ ma of sia!
And that is the end of my story!