Plants August 11, 2020
One species of Cycad has spread around Oceania by producing buoyant, seafaring seeds. Yet while this ancient family have survived a number of extinction events over the last 300 million years, they are vulnerable to human driven environmental changes.
1400 words

An Ancient Master: The tricks and trials of Cycas micronesica

Cycads have been called living fossils and that is partly correct. Cycads were among the first seed-bearing plants, and this was the basis of their worldwide dominance from about 300 million years ago to about 70 million years ago, when now-familiar flowering plants emerged and became more dominant. A small but very successful group within the genus Cycas (Asian Cycads) evolved a spongy tissue within the hard shell of the seed, making the seeds buoyant in water. These plants also developed an ingenious after ripening process, so that once the seeds fall off the mother plant, the embryo embedded within the hard seed shell may require up to one year before it is strong enough to germinate. Together, these adaptations made cycad sea travel possible and unsurprisingly they are often found often growing near water bodies or at the sea front. This also means that the propagation cycle can continue when new seeds fall off into the sea and get transported away by currents and storms. The cycads seafaring qualities suited Oceania, with many islands colonised by this genus. 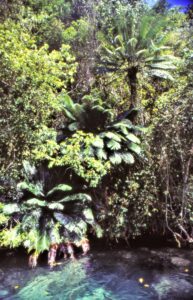 Cycas micronesica was once one of the most abundant plants in Guam’s forest, is in fact the only native gymnosperm on the island of Guam and neighboring Rota, Yap and Palau. All these islands are small, Guam being the largest island is 549 km2 while Yap is less than 100 km2 of landmass. Cycas micronesica is endemic, living nowhere else on earth.

Cycas micronesica is a keystone species, acting as hosts for numerous other plant, insect, bats and birdlife. Cycads characteristically form symbiotic relationships with specific organisms, often linked to pollination in the form of specialized interactions with beetles. Cycas plants act as a brood site of many of Guam’s beetles who rely on C. micronesica tissues as larval food. For example, the larvae of the native stem borer Dihammus marianarum feeds on stem tissue. The Lepidoptera pollinator Anatrachyntis sp. feeds on male cone tissue after pollen dispersal.

A 2010 IUCN report found that 62 percent of the world’s cycads are threatened with extinction, making them the most threatened group of plant species on Earth. Cycad-specific pests have combined with other herbivores to eliminate seedling and juvenile trees and reduce the population of mature trees by 75 percent. It is the cycad’s evolutionary quality of being attractive to relationships with insects that is leading to its demise – precisely because those relationships have not co-evolved to be symbiotic. Cycads have survived three global extinction events, including one which wiped out more than half of the world’s plant and animal families, but are particularly vulnerable to human pressures. 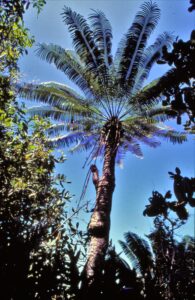 Of the original cycads, only 356 living species are known today and several of those have recently become extinct in the wild. Habitat destruction, dam building and unsustainable plant collecting have triggered their decline, as well as more complex and less understood impacts such as pollination failure due to pesticide use, habitat alterations, introduced pests, natural disasters, and sea level rise. This species has recently and very rapidly suffered and is now considered almost extinct in Guam and Rota. Since 2003, two cycad species have become Extinct in the Wild” due to human activities, and Cycas micronesica is following along a similar track.

The cycads have so far survived urban expansions in Guam, often remaining within golf courses and seaside tourist attractions. Amongst its most critical threats is the introduced insect Aulacaspis yasumatsui that resides on the cycads, often covering the whole leaf crown. This severely limits photosynthesis, and over time depletes stored carbohydrates to the degree that plants suffocate and die. The specialist leaf miner Erechthias sp. quickly spread through out the cycad populations and further weakened the plants. Another introduced species, the Chilades pandava, better known as the Cycad Blue butterfly was first recorded in Guam around 2005, probably by accident through horticulture trade. In Guam the butterfly became a serious pest that attacked new leaves of all ages and sizes of the native cycad and in many cases completely defoliate the plants. A final blow has been the native stem borer, not previously attracted to the native cycads but as an ever-increasing amount of decomposing cycad stems appeared, the borers got a taste for the cycad stem and has sadly pushed the species to the very brink of no return. The mortality of Cycas micronesica on Guam was recorded as 92% only 6 years after the scale was first recorded, and has reached 96% by 2020.

In Guam, Cycas micronesica seed tissue has been used as a source of starch in the traditional human diet, especially important during times when tropical cyclones destroyed other crops. As the C. micronesica population is threatened, so too is the traditional knowledge that enables preparation of this historical food source.  And yet there is a problematic cultural relationship with the human population as a food, particularly as incorrect preparation of its flour is linked to neurogenerative disease ALS-PDC, as is consumption of the bats who also feed off the Cycas micronesica. It was originally thought that the old tradition of eating cycads seeds gave rise to the disease, however, locals that where asked about it claimed it was only eaten as emergency food during famine and lack of other sources of food. A second theory came forward, that once native Giant Fruit Bat Pteropus mariannensis was heavily hunted and thought after as a delicacy. The fruit bats had been seen eating the seeds of the cycads, and thus could bioaccumulate the cycad specific toxin called BMAA and transfer it to any person consuming the bats meat. Regrettably, the Giant Fruit Bats population on Guam has dwindled down to very few individuals, an effect of the introduced brown snake predating the young babies.

In case this species becomes locally extinct on Guam and Rota, three ex-situ cycad gardens have been established with seeds from several different habitats around Guam. And yet this species also relies on specific insect and bird populations, which have also faced radical decline in Guam and elsewhere through the islands. In 2007 Thomas Marler at the University of Guam started a project to collect seeds from as many mother plants in every known, at that time existing, populations of the cycad in Guam and Rota. The seeds where distributed to two specifically cycad orientated Botanical Gardens, Nong Nooch Botanical Garden, Thailand and Montgomery Botanical Center, U.S.A. The third batch was grown on a remote offshore island, Tinian, in a last effort to keep the endemic cycad from going extinct. On October 25, 2018, Typhoon Yutu an Category 5 typhoon made a direct hit in Tinian, it was the worst typhoon to hit the islands since 1935. The rescued cycad plants were heavily damaged and sustained maintenance of was not adequate thereafter. The last remaining plants are being carefully hand pollinated in order to maintain both the original population genetic but also to increase the number of plants from each ex situ populations has been ongoing and seeds has been shared with other conservation minded botanical gardens and research centers. 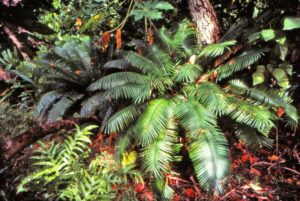 The best hope for this endemic species of Cycas is now in the hands of a handful of highly dedicated Botanical Gardens and efforts to ensure the non-native insect pests to not invade Yap and Palau islands. It is needless to say, our dream to one day reintroduce the species back to Guam and re-establish some lost populations but with the pests still at large and typhoons getting more frequent and stronger we can so far only dream of restoring what has been lost. Again, this plant is tied very closely to Guam’s ecosystem health, operating as a canary in the coalmine. Conservation of biodiversity is not straightforward, and no recipe applies to every threatened species (Marler & Lindstrom, 2014). Conservationists must approach case studies such as this by resisting the tendency to elevate the importance of conserving the plant host above that of the native insect herbivores.

Cycads are a window into the past, and continue to offer value into the future. Many have survived virtually unchanged since the Mesozoic era, and in recent years interest in cycads has increased due to a need to identify the toxic and carcinogenic substances these plants produce, as well as the recognition that some compounds from cycads may prove valuable in biomedical research.