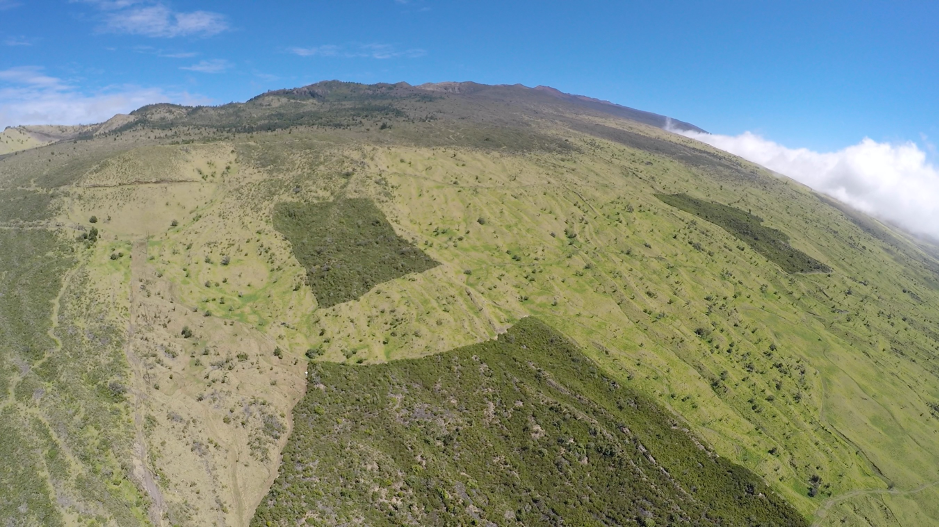 Plants July 28, 2020
Two decades ago wildlife biologist Dr Arthur Medeiros founded the Auwahi project, a large-scale forest restoration project in the Hawaiian Islands. Here he reflects on the project, and on thousands of years of human forest relations in Hawai'i.
1400 words

One Polynesian origin story compares the oceanic explorations of their ancestors to that of an octopus born at Raiatea. The octopus tentacles, like their voyages, stretched to the far flung reaches of the Pacific, east to Aotearoa, south to Rapa, west to Rapa Nui, and north to Hawai’i.

With superb observational skills of currents, stars, the sun, clouds, birds, and oceanic reflections and marked by extreme courage, intelligence and strength of character, in simple sailing canoes, the Polynesian people navigated the largest single feature on the planet. The Pacific Ocean became their marae (temple), as they crossed and re-crossed traditional oceanic paths as if they were like modern highways.

When the first canoes touched their prows onto the sand, theirs were the first human footprints ever in Hawai’i.

Those first Polynesian explorers witnessed forests, best compared to cathedrals paving their way to sunlight. Newly arrived explorers entered forest worlds layered with plants, loudly governed by birds. Without any previous human exposure, these birds flitted closer than any of the explorers had likely previously witnessed, flashing glinting iridescent red and yellow feathers in the sun as they passed, without fear, without suspect of these new arrivers or any of the things that were to come. Forests that fell into the sea all around the island were about to become the explorers’ new home. The native creatures and plants as well as the 28 species of plants they brought with them, were to become their entire world.  Without outside support, their civilization would develop for over a thousand years, longer than the tenure of most modern nations.

In the cosmology of the Hawaiian people, humans, their lives and their origins are haku (interwoven) with the lives and origins of native plants and animals.

To kanaka maoli (native Hawaiians, literally ‘native or real people’), native species are more than just items for consumption or utilization, they are ritualized, woven into the hula (dance) and their literature, mele (song) and ‘oli, a rapidly spoken, eloquently articulated, acapella chant. The Kumulipo creation ‘oli which literally translates to ‘the-origin-in-the-deep-blue-past’ articulates the origins of all things with humans woven in.

The fate that befell Hawaiian forests was the same fate that descended upon the Hawaiian people. The arrival of European explorers and missionaries and exposure to the outside world changed everything almost overnight. Hawaiian cultural traditions and histories, language, and law systems were destroyed as quickly as native ecosystems unraveled, all in the face of completely unparalleled forces, released from continents and from the decks and holds of wooden sailing ships.

When the deadly haze of mai’a-pu’upu’u-li’ili’i (smallpox) lifted, a proud empire of revered navigators and agriculturalists had themselves been tragically dismembered, barely recognizable compared to their former glory. The Hawaiian cosmology of intertangled fates of native plants and animals and the Hawaiian culture seems sadly true as the spirits of these maoli entities struggle together under colonization and reapportioning. Hawaiian masters of the land and seas had been reduced to a fate increasingly dependent upon the plans of the current masters, foreigners to this land and sea.

Entomologist Wayne Gagne described Hawai’i’s deforestation and loss of biota as her “tragic dismemberment”. A standard part of the tour of what was left of Hawai’i’s biological diversity in the 1970s and 1980s was to visit the ghost-like remnants of forests at Auwahi on ‘Ulupalakua Ranch on the leeward side of Haleakalā volcano on Maui island. These visits sometimes reminded me of the bus tours I had heard about when traveling through South Africa where you could go into and witness the townships of struggling people. When assessing Hawaiian dry forests in the 1990s, biologist colleagues and I referred to them as ‘museum forests’, as valuable as museums but also nearly as lifeless. These forests, through abuse and neglect, had declined to the point where there were only ghosts of the former forest, centuries old ancestor trees, each the kinolau (physical manifestation) of a specific Hawaiian deity. A field of ancient ghosts of the past, too stubborn to die.

By the late 1990s, after repeated burnings and two hundred years of grazing and browsing, what was left of the forest was a scattering of native survivor trees in a pasture, the tracing of a former primeval forest, but exploded open with sunlight. Everything else was gone. The kikuyu grass (Cenchrus clandestinus), native to montane East Africa, grew everywhere, swirling in luxurious mats up to a meter deep, wrapping around the trees invading their root bases and crawling onto their trunks. It was almost as if these trees, the last representatives of their type on the planet were drowning in a foreign sea in their own native lands. The few surviving trees now standing in the pasture at Auwahi were the same trees that had heard Hawaiian language being spoken by the people that lived in adjacent villages and witnessed the passing of Cook’s ships to the south.

Mao Zedong once said, “it’s always darkest before it becomes totally black.” Sadly, that has much too often been my experience as a conservation biologist working for Hawaiian ecosystems. Today, Auwahi exists as a refutation that this axiom is always true.

Perhaps to the world, Auwahi best serves as a bright candle, a place where beleaguered forests that had come to within the last few acres of the vanishing point, and were at that moment defended by biologists, private landowner, and community members, scrambling without precedent to do all that could be done.

A reminder that at least here, at one place, biological erosion was stilled, and that that stilling had happened only because human hands had intervened.  At Auwahi, these actions precipitated forests beginning to come back to life, almost as if from a deep slumber from which there is rarely any returning. At Auwahi, ordinary humans, like all the other humans in the world, stood up and when they did, their forests roared back to greenery.

Together, an all out effort, without parallel in Hawai’i, was launched to save at least vignettes of Maui’s ancient forested past. Few could have imagined the growth of the project from poster child for the loss of Hawai’i’s diverse forests to hopeful example of community pride for the efforts being made (www.auwahi.org). I am proud to be part of a historic community effort to see if native forest systems of leeward Maui can, with assistance from humans, haku themselves back together. Auwahi has become a sanctuary forest, a place where a critical part of Hawai’i’s biota, especially native tree species, have a refugium in a modern world that has no other place for them.

Without the strident, founding support of native Hawaiians, including some now past heroes, the Auwahi project simply could not have achieved what it has. In their cosmology, they, the ancestors of the original peoples, also share ancestors with the trees, birds, insects, and forests – their flesh and blood part of wood and leaf. There is a strong belief in kanaka maoli that the more ancestors that get across the river, the more components of their original world that are preserved, the greater possibility that this cosmology can be reassembled on the other side. With our modern sterile almost distant views of nature, forest fragments throughout the Pacific and beyond stand little chance. But if the original cosmologies can be relit, to become something more than Latin names kept in long columns but rather as something living, a sacred sanctuary place like a cathedral, where those who believe can practice their worldview, then maybe forest fragments of Auwahi, of Hawai’i, of the Pacific and beyond will have a chance.