Insects June 17, 2020
At the beginning of the 20th century, the traditional way of life of the populations of the islands of Fiji was threatened by the invasion of a mysterious moth, a pest of coconut trees. The use of biological control as an ultimate solution proved to be very effective. But was it really worth it?
1100 words

The Coconut Moth of Fiji

A century and half ago, in the island of Viti Levu in Fiji, a small moth had become a big problem. The coconut palms of the island, a cornerstone of indigenous economy and way of life, were being ravaged by the caterpillars of a tiny insect. This pretty little moth with iridescent purple wings was a species of burnet moths in the Zygenidae family, first discovered during its first outbreak in 1877 in Viti Levu, and described by British entomologist George Thomas Bethune-Baker in 1906 as Levuana iridescens.

The economy of the island back then was largely based the cultivation and export of sugar cane, but native Fijians also relied heavily on products derived from the coconut trees for survival. They used dried coconut flesh (copra) as substitute for yam and taro in their diet, and used palm trees in building construction, firewood, and to make all kinds of everyday objects. Coconut oil, extracted from dried flesh, was a major traditional medicine staple and a source of trade and income.

The caterpillars of the coconut moth mined the underside of coconut leaves, killing the leaves and weakening the palms which prevented them from bearing fruit. Although the populations of the moth fluctuated in Viti Levu, recurring episodes of outbreaks resulted in heavy defoliation and the death of many palm trees. The moth then gradually began to spread into the smaller islands in the periphery of Viti Levu with similar consequences. These migrations gave rise to fears of colonization of the entire archipelago. The situation was quickly getting out of hand.

Between 1909 and 1924, the Fijian government tried a number of measures to control the spread of the moth and its destructive effects, all of which led to failure. Spraying chemicals on the tall palms proved too costly, unhealthy for the environment, and often impossible due to presence of permanent winds on the Island. The use of light traps to control the populations of this diurnal moth did not work. Importing supposedly resistant varieties of coconut palms, and attempts in changing some of the cultural practices to improve the resistance of local varieties was unsuccessful. Workers were employed to manually tear the fibrous hair of coconut palms (vulu) from the base of the leaves where the moths laid their eggs, but the very high leaves were often inaccessible. Attempts to quarantine the island and inspect all exports didn’t work either, particularly because egg-infested vulu fibers were commonly used as packaging material.

In 1925, Canadian entomologist John Tothill, together with his colleagues Ronald Paine and Thomas Taylor, led a 2-year campaign to reduce the impact of L. iridescens and prevent its spread to the rest of the archipelago. Tothill was a firm believer in classical biological control and his strategy was to look for and import a natural enemy of the moth, which itself was thought to be recently introduced. The hypothesis that L. iridescens was not endemic to Fiji and arrived from another area in ​​the Pacific rested upon several factors: lack of any known records prior to its first outbreak in 1877, its strictly-limited presence on Viti Levu while most of the endemic species of Fiji were on several islands, its recent expansion to the surrounding islands, and the very unusual absence of any specialist parasites attacking it. However, it is also possible that the moth was endemic to Fijian coasts but rare, its populations were kept in check by generalist parasitoids, and it remained undetected until coconut palms began to be cultivated inland in large monocultures, leading to its first outbreak in 1877. To this day, none of the surveys carried out in the South Pacific, from New Guinea to Australia, have found this species outside of Fiji.

Tothill discovered that the larvae of another burnet moth from Malaysia, Palmartona catoxantha, showed many biological, ecological and dietary similarities to those of L. iridescens. This species also experienced periodic population explosions during which the caterpillars caused defoliation of palm trees, but these outbreaks were curtailed by a variety of natural enemies and parasites. Tothill decided to transfer some of these parasitized larvae to Viti Levu and see if these parasites would also control L. iridescens. Coordinating the transport of these larvae to Fiji at the time of an outbreak was not easy, but in August 1925 he managed to successfully transport 20,000 larvae of P. catoxantha from northern Kuala Lumpur to Viti Levu on protected potted palms. Upon arrival, the cargo also delivered 315 adults of Bessa remota, a parasitoid fly of the family Tachinidae that emerged from parasitized larvae of P. catoxantha. While in quarantine, these flies were presented with the larvae of L. iridescens, which they promptly proceeded to parasitize and kill. The flies were then reared in captivity, and in January 1926 more than 32,000 adults of B. remota were released on the island. In just 3 months, the outbreaks of L. iridescens were reduced only to a few rare local ones, and the moth became almost undetectable in most of Viti Levu. 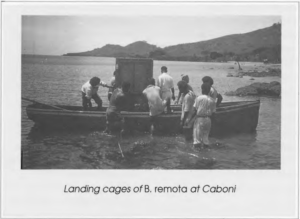 In 1994, The World Conservation Union (IUCN) declared the moth extinct. A second species of burnet moth endemic to Fiji, Heteropan dolens, which was also declared extinct because of unintended parasitism by B. remota, was later rediscovered in 1963. There is still considerable doubt surrounding the faith of L. iridescens. The last sighting of the moth dates back to 1956, but have the search efforts to locate the moth been sufficient? It is possible that some populations survived at very low numbers, especially in small inaccessible offshore islands neighboring Viti Levu (like Nukulau and Makuluva), where coconut palms are not maintained for commercial use. It would be very difficult to encounter the moths only by active searching, and without the aid of artificial pheromone attractants, which are currently unknown for these moths, the best method would be to use malaise traps on the tallest palms at canopy level. Permanent winds that dominate the Fijian coasts calm down only twice a day for about 30 minutes, when the winds change direction. The best time to look for adults of L. iridescens would probably be August to December, at times of day when these winds are calm. No attempts, historical or recent, seem to have been made to find L. iridescens in this window.

Over the recent decades, the tone of discussion around the faith of L. iridescens has shifted from “a successful example of classical biological control“ to “extinction of a native insect following the introduction of an exotic control agent”. Extinct or not, the story of L. iridescens is a lesson in what not to do when devising biological control strategies for localized island species.