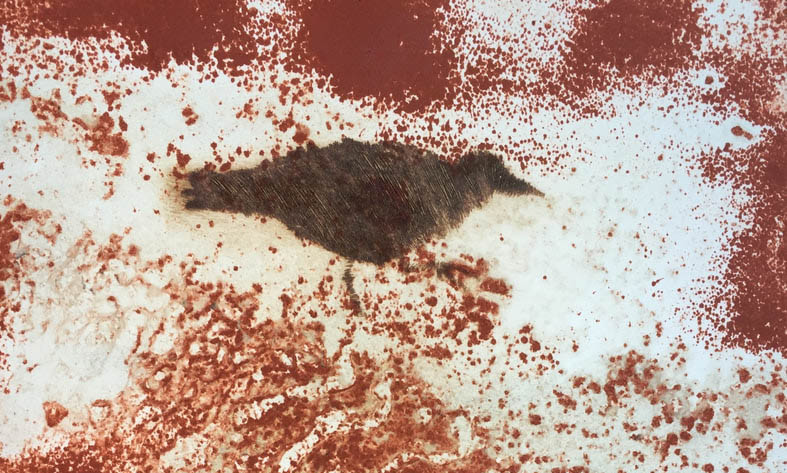 Birds April 30, 2020
A selection of works from The Overwintering Project, an artist initiative which seeks to raise awareness of the shorebirds which migrate to Australian and New Zealand shores from above the Arctic circle.
1300 words

Brown birds in a brown landscape, migratory shorebirds are our most endangered group of birds. Every year they migrate from the shores of Australia and New Zealand to their breeding grounds above the arctic circle in Siberia and Alaska. The remarkable annual circuit that they fly is called the East Asian-Australasian Flyway and it passes through 23 countries.

The Overwintering Project: Mapping Sanctuary is an art initiative seeking to raise awareness for our migratory shorebirds and their habitat by inviting artists, children, and interested community members to help make them visible. The following are a selection of artworks and poems from the project. 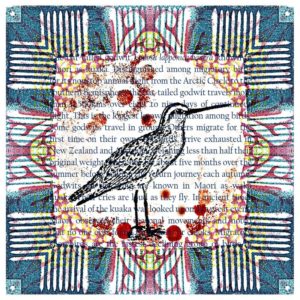 As a child in New Zealand, I was fascinated by stories of godwits. In ancient times the arrival of the godwit or kuaka was looked upon as a great event. Kuaka on the wing are known as waka kuaka. These birds were mysterious to the Maori who followed the course of their flight in canoes and never found their eggs or chicks.

The longest known migration among birds is recorded by Bar-tailed Godwits which are now endangered due to loss of habitat. They travel over 11,500 kilometres from the Arctic Circle to Australia and New Zealand, up to ten days of continuous flight.
Traditionally, when the birds are first seen in the South Island of New Zealand, usually around mid September, church bells ring out to welcome them and farewell them again approximately six months later.

Many Bar-tailed Godwits overwinter near where I now live in south-eastern Australia. There are no church bells at Lake Wollumboola but we are glad to welcome them all the same. 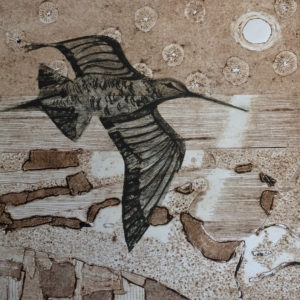 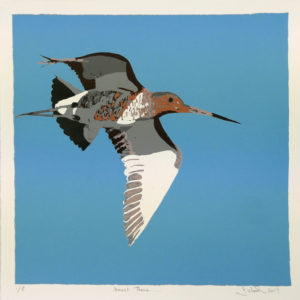 Jo Wood is a printmaker who specialises in multi-coloured screenprints. She is a trained textile designer and musician, loves photographing, sketching and drawing in outdoor locations and turning that into screenprints. Her artwork is also inspired by Stoic Philosophy, i.e. seize the day and be as productive as you can in life. The Black-tailed Godwit’s breeding colours and shape inspired her prints, based on a photograph by Mattias Hofstede. The Black-tailed Godwit (Limosa limosa) is one of WA’s Peel Harvey Estuary migrating birds that start to arrive in October.

Wood’s two-plate print was inspired after reading ‘Stepping Off: Rewilding and Belonging in the South-west’ by Thomas M. Wilson. Wood’s work depicts a starfilled sky, the sea, the estuary and the inlet on a bright full moon night, and a migratory Black-tailed Godwit looking for a spot to land. The slightly darker speckled area on the far right represents the extent of Mandurah’s current urban development. The lighter speckled areas that spread over the rest of the image represent the predicted urbanisation around the Estuary and Inlet to 2050. The darkest areas are the currently protected wetlands, rivers and lakes. The white space is other undeveloped land. The collage at the bottom edge represents farmland. 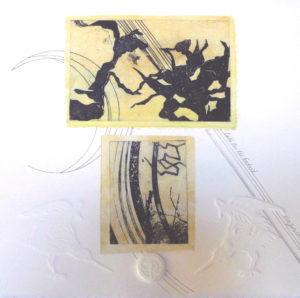 The Godwits/Kuaka arrive and depart every year in Heathcote Valley, where I have lived for the past 26 years. Residents of Christchurch welcome and farewell the Godwits/Kuaka every year with a ceremony (September and March). Declining numbers of birds in the past 2 years to this site from around 2000 birds to 1500 birds. One reason: habitat loss to their resting places on their journey to Alaska. (Yellow China Sea and Korea). Estimated total number of population in Aotearoa: 80,000.

Title: Karangatia mo te Kuaka/Call for the Godwit: (1) Kuaka are preparing for their long flight, spreading wings; lines & circles symbolise longitudes / latitudes; shapes and forms symbolise habitat and landscapes (2) Karangatia – Call for: a call to us to preserve habitat, embossed Kuaka symbolise the threat of disappearance due to habitat loss. 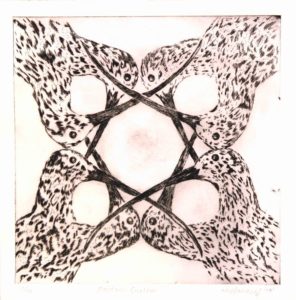 The Eastern Curlew’s status under the EPBC Act is Critically Endangered. This beautiful bird takes an annual migratory flight to Russia and China to breed, arriving back home to Australia in August to feed on crabs and molluscs in intertidal mudflats. I chose this bird to raise awareness that this species will most likely be lost in our lifetime. Their habitat is disappearing, and where there is still mud, dogs and drones are scaring them. We need stronger nature laws to protect our precious shorebirds. 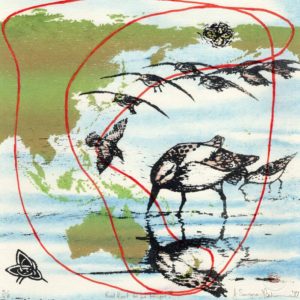 The print Red Knot to be Forgot? was inspired after researching the birds that migrate to or ‘overwinter’ to the islands and tidal areas of Moreton Bay, Queensland. The Red Knot travels here each year from its breeding grounds in Chukotskiy Peninsula Siberia and Seward Peninsula Alaska often in a non-stop flight, losing almost half its bodyweight along the way. In its breeding colours it is a beautiful rufous colour, fading to a speckled grey by the time it reaches our shores. It spends less than three months in its Artic breeding grounds to fly up to 14,000 klm south on a 50cm wingspan. The Red Knot is a regular visitor to the tidal flats near Wynnum Bird Hide and other tidal areas around Moreton Bay. There are grave concerns that Global warming is destroying its overwintering sites and breeding grounds and it has already been declared endangered in the USA.

One Red Knot nicknamed Moonbird (tag B95), has been recorded migrating between Canada and Terra Del Fuego for 20 years, flying further than the distance to the moon, hence the name. 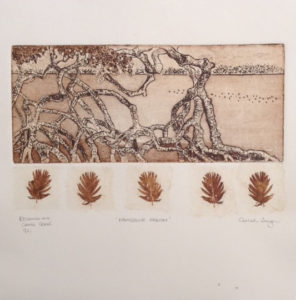 Overwintering shorebirds seek locations that provide food and safe habitat to build up their resources for the long flight back to the northern hemisphere. Many Overwintering locations are being lost to development and the expanding urban sprawl. Six of these species are either vulnerable, endangered or critically endangered and they overwinter in this area. It is imperative that local authorities acknowledge and allow for limited development in these areas, which in turn provides safety from domestic and feral animals. Educational signage about these amazing little birds would give an insight into the enormous annual migration they endure. 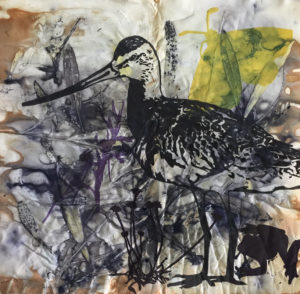 The city of Hobson’s Bay, in Melbourne’s west, is lucky to enjoy over 20 km of beach and foreshore, as well as many locally and globally significant wetlands. These places include Truganina Swamp, the Truganina Explosives Reserve, Cherry Lake, the Altona Coastal Park, Jawbone Reserve, Newport Lakes and the internationally recognised, Ramsar listed, Cheetham Wetlands. A total of five creek systems also run through the municipality, including Skeleton Creek, Laverton Creek, Cherry Creek, Kororoit Creek and Stony Creek.

I made these prints for the Overwintering Project: Hobson’s Bay exhibition, using species that I had seen on Altona Beach as well as referencing endangered species of the remnant grasslands of the Great Victorian Basalt Plain. The paper was first eco-printed using local vegetation.

My work is a general statement about migration, overwintering and habitat needs from the birds’ perspective.

Flying, flying, flying
We cross continents
Wind howls, rain pours
Doggedly we flap our wings
Up and down, up and down
Hour upon hour
Until we reach the end of our strength
Following our inbuilt navigation systems

Surely somewhere closer to home could satisfy our needs
But no, year after year we come, young and old
Making this epic and hazardous journey
We simply must reach our winter paradise
A place in the sun
A place where our parents and grandparents and great grandparents came before us
A place that speaks to us, that holds our roots
All we ask is the constancy of food, shelter and safety in that place
Surely that isn’t too much